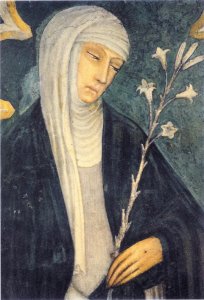 Saintly Wisdom from St. Catherine of Siena: God Calls Us to Love (not hate)

Saint Catherine of Siena (1347–1380) was one of the first women (along with St. Teresa of Avila) to be declared a Doctor of the Church in 1970. She is one of two patron saints of Italy together with St. Francis of Assisi. Her written works include spiritual treatises such as The Dialogue, which was dictated during mystical prayer and ecstasies. She was a tertiary (lay member) of the Dominican Order.

She lived during a time of problems in the Church. During her life she spent many years in solitude and prayer, but God called her also to action where she influenced Pope Gregory XI then living in Avignon, France to return the papacy to Rome. Later during the Great Schism of the West, she sent numerous letters to princes and cardinals to promote obedience to the then Pope Urban VI and defend what she calls the “vessel of the Church.” She was entrusted with many missions by the popes, which was rare for women at that time.

In our church and world today, there is much confusion, division, scandal, and disunity. During these difficult times, God is calling us to hold fast to the faith handed down from the apostles and even to be saints. Jesus founded a visible church here on earth on St. Peter and prayed that we’d all be one.

God calls us to love himself above all and to love others as we love ourselves. The Bible says we are to be obedient to legitimate authorities such as those in the church, our nation and our home as long as we are not asked to do something wrong or commit a sin. (See Romans 13) The devil, on the other hand, seeks disunity and hatred of God, the church, the country, and each other.

It seems in news reports that hate is increasing in the world including hatred of God and religion. As followers of Christ we are told in the Bible to return good for evil and to pray for our persecutors, etc. We also need to pray for our church and the conversion of sinners. We must decide to love people as Jesus did even if we dislike how they are acting. Jesus loved sinners and came to save sinners including us. Jesus desires that we have his interior peace even if the world around us is anything but peaceful. Doing God’s will brings inner peace.

Romans 12:17-21 —Repay no one evil for evil, but take thought for what is noble in the sight of all. If possible, so far as it depends upon you, live peaceably with all. Beloved, never avenge yourselves, but leave it[a] to the wrath of God; for it is written, “Vengeance is mine, I will repay, says the Lord.” No, “if your enemy is hungry, feed him; if he is thirsty, give him drink; for by so doing you will heap burning coals upon his head.” Do not be overcome by evil, but overcome evil with good.

The following quotation from The Dialog of St. Catherine of Siena addresses some of the issues we face today, as in not judging or being scandalized or having contempt for others:

“Another thing is necessary for you to arrive at this union and purity, namely, that you should never judge the will of man in anything that you may see done or said by any creature whatsoever, either to yourself or to others. My will alone should you consider, both in them and in yourself. And, if you should see evident sins or defects, draw out of those thorns the rose, that is to say, offer them to Me, with holy compassion.

In the case of injuries done to yourself, judge that My will permits this in order to prove virtue in yourself, and in My other servants, esteeming that he who acts thus does so as the instrument of My will; perceiving, moreover, that such apparent sinners may frequently have a good intention, for no one can judge the secrets of the heart of man.

That which you do not see you should not judge in your mind, even though it may externally be open mortal sin, seeing nothing in others, but My will, not in order to judge, but, as has been said, with holy compassion. In this way you will arrive at perfect purity, because acting thus, your mind will not be scandalized, either in Me or in your neighbor.

Otherwise you fall into contempt of your neighbor, if you judge his evil will towards you, instead of My will acting in him. Such contempt and scandal separates the soul from Me, and prevents perfection, and, in some cases, deprives a man of grace, more or less according to the gravity of his contempt, and the hatred which his judgment has conceived against his neighbor.

“A different reward is received by the soul who perceives only My will, which, as has been said, wishes nothing else but your good; so that everything which I give or permit to happen to you, I give so that you may arrive at the end for which I created you. And because the soul remains always in the love of her neighbor, she remains always in Mine, and thus remains united to Me.

Wherefore, in order to arrive at purity, you must entreat Me to do three things: to grant you to be united to Me by the affection of love, retaining in your memory the benefits you have received from Me; and with the eye of your intellect to see the affection of My love, with which I love you inestimably; and in the will of others to discern My will only, and not their evil will, for I am their Judge, not you, and, in doing this, you will arrive at all perfection.

“This was the doctrine given to you by My Truth, if you remember well. Now I tell you, dearest daughter, that such as these, who have learnt this doctrine, taste the earnest of eternal life in this life; and, if you have well retained this doctrine, you will not fall into the snares of the Devil, because you will recognize them in the case about which you have asked Me.

God have mercy on us. St. Catherine of Siena pray for us!
3