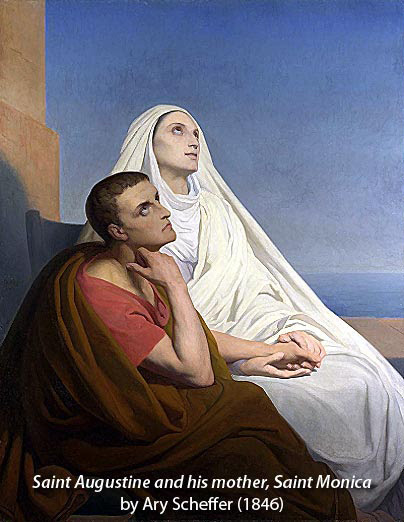 August 27th is the feast day of Saint Monica (322–387 A.D.) She is remembered especially for her many years of prayer for the conversion of her son, Saint Augustine of Hippo, whose feast day is August 28th. She also prayed for her difficult husband and mother-in-law who eventually converted to Christianity.

Monica tried to raise Augustine to be a Catholic Christian. Like many teenagers today, he became involved in a different belief system popular at the time and also had a live-in girlfriend, and even a son out of wedlock. He didn’t want to give up his girlfriend, nor did he want to marry her. At one point he even prayed, “Grant me chastity and continence, but not yet.”

Monica prayed, cried, and tried to convince Augustine to change his ways, but he was caught up in lust and his sinful lifestyle. At one point a holy bishop consoled her by telling her, “The child of those tears shall never perish.” Instead of converting though, Augustine decided to go to Rome to learn more of the world even though Monica prayed that he would not go. Monica followed him to Rome and then Milan where Augustine met St. Ambrose who influenced him and helped him convert to Christianity after almost two decades of resistance.

Monica lived to see her prayers answered, and mother and son spent some time together in peace. Augustine speaks about his life, struggles, conversion, and his mother in his famous classic book Confessions.

What can we learn from Saint Monica?

Saint Monica exhibited heroic virtue in her Christ-like love and constant prayers for others especially for her son Augustine. She is an example of the perseverance in prayer that Jesus spoke of in The Parable of the Widow and the Unjust Judge:

Luke 18:1-8 Then Jesus told them a parable about their need to pray always and not to lose heart. He said, “In a certain city there was a judge who neither feared God nor had respect for people. In that city there was a widow who kept coming to him and saying, ‘Grant me justice against my opponent.’ For a while he refused; but later he said to himself, ‘Though I have no fear of God and no respect for anyone, yet because this widow keeps bothering me, I will grant her justice, so that she may not wear me out by continually coming.’” And the Lord said, “Listen to what the unjust judge says. And will not God grant justice to his chosen ones who cry to him day and night? Will he delay long in helping them? I tell you, he will quickly grant justice to them. And yet, when the Son of Man comes, will he find faith on earth?” (NRSVCE)

Saint Monica shows us that we should keep praying for others and not give up. Her persistence in prayer paid off in the end, just as Jesus said it would in his teachings.

It is interesting that it seems Monica did all she could to convince Augustine to change his ways, but that doesn’t seem to have been as successful as her prayers. How many times do we try to convince people, and it seems to fall on deaf ears? But God had a plan in sending Saint Ambrose to teach and help Augustine take steps to become a Christian, priest, bishop, and saint. Part of God’s plan was that this would happen in Italy, even though Monica prayed that Augustine would not go there.

When Monica followed Augustine to Rome in her attempts to protect him and convert him, she also met St. Ambrose who gave her some advice, which she took to heart. He told her, “Speak less to Augustine about God and more to God about Augustine.” That seems to suggest that maybe her constant efforts to convince were maybe hurting things rather than helping?

What else can we do but pray?

Scripture tells us that faith comes from hearing (Romans 10:17). We are called to share our faith with others, but sometimes when we try to convince others and nag them over and over, it can make them resistant. If people are resistant and not open to hearing about it, all we might be able to do for the time being is to treat them with unselfish Christlike love while demonstrating the faith in action. If we have already taught or told them what God wants, they already know what we think.

When we tell others about the faith or perhaps give them information about the faith like a good book, audio, or link to a website, it is like we are planting seeds. Seeds take time to grow, and God ultimately is the one who converts a person and draws them to himself. God desires the conversion of everyone even more than we do. God is love and desires a loving relationship with everyone. We can put all our troubles and desires into God’s hands and ask God to show us what we can do.

As we continue to pray, we need to allow God to answer our prayers in his timing, trusting that he is hearing all our prayers, and desires everyone’s salvation and good. When we trust in God, do what we can, and continue praying with trust in God, we can find peace even in difficult situations.

Along with praying to God for others, we may also ask for the prayers and intercession of the saints such as St. Monica who understands how difficult it is to watch a loved one going in the wrong direction. Especially during this 100th year Anniversary of Fatima, it seems worth mentioning that part of message of Fatima was to pray and make sacrifices for the conversion of sinners. The following is from http://www.rosary-center.org/fatimams.htm:

In August of 1917 Our Lady told the children, “Pray much and make sacrifices for sinners, for many souls go to hell because there is no one to make sacrifices for them.” As to the kinds of sacrifices Our Lady was asking, she revealed to Sr. Lucia on one occasion: “The good Lord is allowing Himself to be appeased . . . but He Himself complains most bitterly and sorrowfully about the small number of souls in His grace who are willing to renounce whatever the observance of His laws requires of them.”

“Many persons,” Sr. Lucia explained, “feeling that the word penance implies great austerities, and not feeling that they have the strength for great sacrifices, become discouraged and continue a life of lukewarmness and sin.” Then she said Our Lord explained to her: “The sacrifice required of every person is the fulfillment of his duties in life and the observance of My law. This is the penance that I now seek and require.”

Monica died not too long after Augustine’s conversion. She told Augustine, “Son, nothing in this world now affords me delight. I do not know what there is now left for me to do or why I am still here, all my hopes in this world being now fulfilled.”

St. Monica is the patron saint of difficult marriages, disappointing children, victims of adultery or unfaithfulness, victims of (verbal) abuse, and conversion of relatives. All of these problems are still with us today.

Saint Monica pray for us and our loved ones. Jesus, I trust in you.