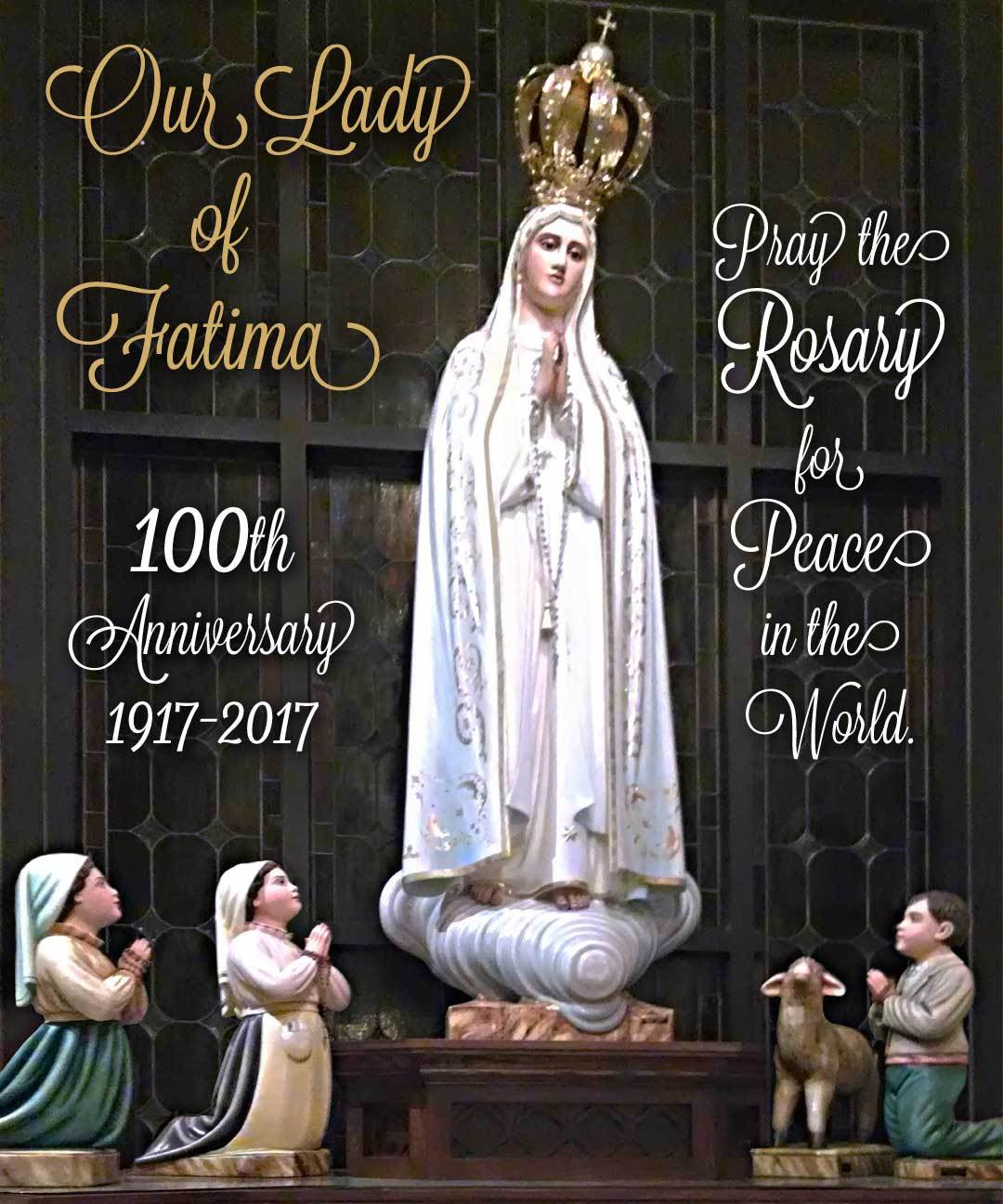 October 13, 2017 marks the 100th year anniversary of the Miracle of the Sun at Fatima, Portugal. On this day, we especially remember how Mary, the mother of Jesus, appeared to three shepherd children with very important monthly messages from May 13, 1917 to October 13, 1917. Also, as she foretold, there was a great miracle on October 13, 1917 seen by tens of thousands of people to prove that she was really appearing and that her messages are real.

Our Lady of Fatima’s messages are still very relevant for today. Mary explained that prayer and sacrifices help bring peace to the world, conversions, and the salvation of souls. We need God’s help and Mary’s intercession as much as ever in these troubled times with many people being out of touch with the reality of God’s existence and love. Today we also seem to be facing more than average man-made and natural disasters, as well as threats of war. Prayer brings God’s mercy and even miracles as we have seen many times in history and in our own lives when we pray and put our trust in Almighty God.

The Fatima messages also reaffirm many Catholic teachings that are called into question in modern times. Mary at Fatima spoke of the existence of God, angels, heaven, hell, miracles, sin, the need for repentance, the Eucharist, the importance of prayer such as the Rosary, Mary’s prayerful intercession with her son Jesus, and much more.

The Story of Our Lady of Fatima

(The rest of this article is mainly taken from Rosary Meditations: The Gospel in Miniature by Kathryn Marcellino.)

Our Lady of Fatima is the name given to the Blessed Virgin Mary when she appeared in Fatima, Portugal in 1917. She appeared to three children, Lucia dos Santos and her cousins, Jacinta and Francisco Marto on the 13th day of six months in a row starting on May 13, 1917. Mary told the children many things including to pray the rosary daily to obtain peace in the world and to offer sacrifices for the conversion of sinners. Mary also predicted future events that came true and gave the children three secrets which they could tell later. 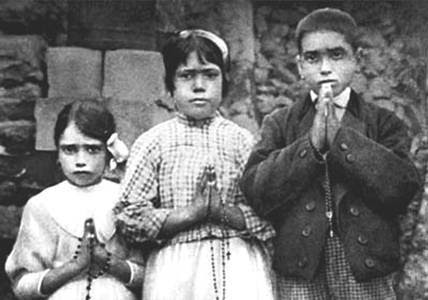 The seers of Fatima: Lúcia Santos (left) with her cousins Francisco and Jacinta Marto, 1917

Apparitions of the Angel in 1916

The first time they were tending their sheep and a strong wind shook the trees. Startled, the children looked up to see a figure coming towards them above the trees. Lucia said, “It was a young man, about fourteen or fifteen years old, whiter than snow, transparent as crystal when the sun shines through it, and of great beauty. On reaching us, he said: ‘Do not be afraid! I am the Angel of Peace. Pray with me.’ Kneeling on the ground, he bowed down until his forehead touched the ground, and made us repeat these words three times: ‘My God, I believe, I adore, I hope and I love You! I ask pardon of You for those who do not believe, do not adore, do not hope and do not love You.’”*

At the second appearance the Angel said, “Pray, pray very much! The most holy Hearts of Jesus and Mary have designs of mercy on you. Offer prayers and sacrifices constantly to the Most High…Make of everything you can a sacrifice, and offer it to God as an act of reparation for the sins by which He is offended, and in supplication for the conversion of sinners. You will thus draw down peace upon your country. I am its Angel Guardian, the Angel of Portugal. Above all, accept and bear with submission, the suffering which the Lord will send you.”*

Another time while tending their sheep the Angel appeared again. Lucia said the Angel was “holding a chalice in his left hand, with the Host suspended above it, from which some drops of blood fell into the chalice… The Angel knelt down beside us and made us repeat three times: ‘Most Holy Trinity, Father, Son and Holy Spirit, I adore You profoundly, and I offer You the most precious Body, Blood, Soul and Divinity of Jesus Christ, present in all the tabernacles of the world, in reparation for the outrages, sacrileges and indifference with which He Himself is offended. And, through the infinite merits of His most Sacred Heart, and the Immaculate Heart of Mary, I beg of You the conversion of poor sinners.’”*

Apparitions of Mary in 1917

On May 13, 1917, ten-year-old Lucia and her younger cousins Jacinta and Francisco were tending sheep at the Cova da Iria near their home village of Fatima, Portugal. Lucia saw a woman “more brilliant than the sun, and radiated a light more clear and intense than a crystal glass filled with sparkling water, when the rays of the burning sun shine through it.”*

Mary asked the children to do penance and “acts of reparation, and to make sacrifices to save sinners.” (Sinners are people who through their own free choice disobey God by doing what they know is wrong, or by not doing what something they know they should do.) The conversion of sinners means to amend or change one’s life according to the teachings of Jesus. Mary told the children that more souls go to hell for unrepented sins of impurity than for any other reason. She also said that certain styles and fashions were being introduced which gravely offend Jesus. This means we need to dress modestly so as not to be the occasion of sin to others.

The Blessed Mother said to the children, “Sacrifice yourselves for sinners, and say many times to Jesus, especially whenever you make some sacrifice: O Jesus, it is for love of You, for the conversion of sinners, and in reparation for the sins committed against the Immaculate Heart of Mary.”*

Our Lady of Fatima said, “Pray the Rosary every day, in order to obtain peace for the world, and the end of the war.”*

On one occasion, Lucia asked Mary if she would take them to heaven. Mary said, “Yes. I will take Jacinta and Francisco soon. But you are to stay here some time longer. Jesus wishes to make use of you to make me known and loved. He wants to establish in the world devotion to my Immaculate Heart.”* This prophecy later came true as both Francisco and Jacinta died of the Spanish flu while still children, but Lucia became a nun and lived to be 97 years old.

When people heard about the visions and miracles at Fatima, thousands of people came to see for themselves. On August 13, 1917, the government administrator, who didn’t believe in the Catholic religion and did not like all the people coming to Fatima, put the children in jail. The administrator questioned the children and tried to get them to tell the three secrets Mary had told them not to tell yet. The children refused even though he said he would boil them in oil if they did not tell him the secrets. The children were aged 10, 9, and 7 at the time.

Mary promised a miracle would occur in October so that all may believe. About 70,000 people came that day to see the miracle including newspaper reporters and photographers. All of a sudden, Lucia called out to the crowd to look at the sun. People saw the sun appearing to change colors and rotate like a wheel and some thought the sun was falling to the earth. Some thought it was the end of the world. Even some people in nearby towns saw the miracle. 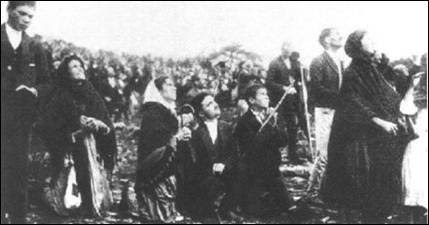 Reports of the Miracle of the Sun

O Século (a pro-government, anti-clerical, Lisbon newspaper), reported the following: “Before the astonished eyes of the crowd, whose aspect was biblical as they stood bareheaded, eagerly searching the sky, the sun trembled, made sudden incredible movements outside all cosmic laws—the sun ‘danced’ according to the typical expression of the people.”

An eye witness report in the newspaper Ordem said, “The sun, at one moment surrounded with scarlet flame, at another aureoled in yellow and deep purple, seemed to be in an exceedingly fast and whirling movement, at times appearing to be loosened from the sky and to be approaching the earth, strongly radiating heat.”

The October 17, 1917 edition of the Lisbon daily, O Dia, reported the following, “At one o’clock in the afternoon, midday by the sun, the rain stopped. The sky, pearly grey in colour, illuminated the vast arid landscape with a strange light. The sun had a transparent gauzy veil so that the eyes could easily be fixed upon it. The grey mother-of-pearl tone turned into a sheet of silver which broke up as the clouds were torn apart and the silver sun, enveloped in the same gauzy grey light, was seen to whirl and turn in the circle of broken clouds. A cry went up from every mouth and people fell on their knees on the muddy ground…. The light turned a beautiful blue, as if it had come through the stained-glass windows of a cathedral, and spread itself over the people who knelt with outstretched hands. The blue faded slowly, and then the light seemed to pass through yellow glass. Yellow stains fell against white handkerchiefs, against the dark skirts of the women. They were repeated on the trees, on the stones and on the serra. People wept and prayed with uncovered heads, in the presence of a miracle they had awaited. The seconds seemed like hours, so vivid were they.”

The above quotes about the miracle of the sun are from www.ewtn.com/fatima/apparitions/October.htm. 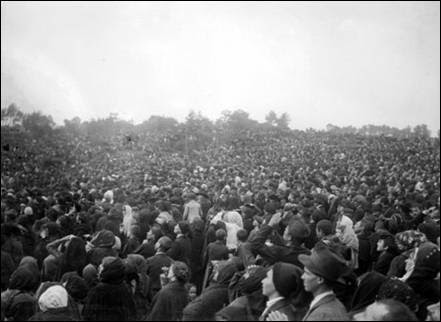 A photo of the crowd taken during the miracle at Fatima on October 13, 1917.

Official Position of the Catholic Church

Private revelations are not part of the deposit of faith of the Catholic Church, and Catholics are not required to believe in them, but the church thoroughly investigated the apparitions at Fatima and judged them “worthy of belief.” Also Pope Francis canonized Francisco and Jacinta on May 13, 2017, declaring them Saints. Saint Jacinta is said to be the youngest nonmartyred person to ever be canonized a Saint. Sister Lucia, who died in 2005, may be beatified soon.

Fatima: Reaffirmation of the Gospel

Overall, the Fatima message reaffirms many teachings of the Catholic faith and the reality of the supernatural realm which is denied by atheists and materialists such as the Gospel message of Jesus, prayer, sin, heaven, hell, angels, miracles, and the Eucharist as the body, blood, soul and divinity of Jesus. It also encourages devotion to Mary who told us how to help save sinners, how to prevent wars, and how to bring peace into the world by obeying Jesus, offering sacrifices, and praying the rosary.

Pray, keep the faith, and trust in God.

(Quotations marked with an asterisk (*) are from the book, Fatima in Lucia’s Own Words)